Norwegian scientists have developed a material which can make hydrogen from water vapor, instead of liquid water. It pays off, because heat is cheaper than electricity, reports Georg Mathisen from Norway. 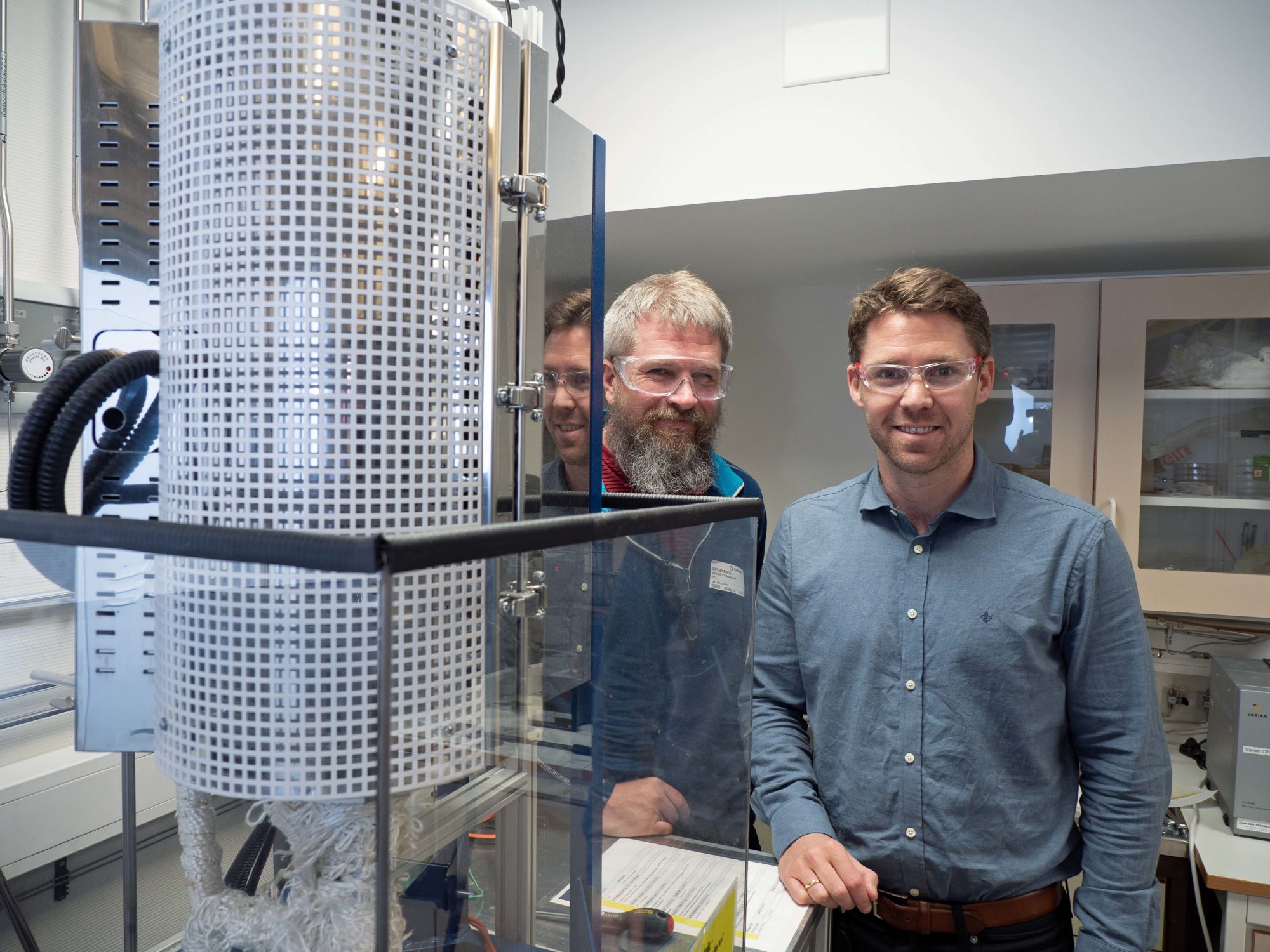 Hydrogen can take over when batteries can no longer do the job. When it is important to store large amounts of energy, for example, more than you need to drive a car for a few hours, it becomes cheaper and more effective to store it in the form of hydrogen.

In simple terms, you use the energy to split water into hydrogen and oxygen. When you need to produce energy, you reverse the entire process by reintroducing hydrogen and generating energy and water.

The most frequently applied method of doing this remains the same as that carried out at the “Vannstoffen” hydrogen factory at the Vemork power plant in Telemark a century ago”, explain Einar Vøllestad and Ragnar Strandbakke. Vøllestad is a research scientist at Norway´s SINTEF Industry and Strandbakke a post-doctoral student at the Centre of Materials Science and Nanotechnology at the University of Oslo.

The talk is of low temperature electrolysis. The method has become better, cheaper and more efficient, but still requires a lot of energy.

“For many years virtually nothing happened because it was so cheap to generate hydrogen from natural gas, and because climate change was not an issue that had to be taken into account”, says Vøllestad. “Now that we pay more attention to renewable energy, the focus has intensified”, he says.

Renewable energy means that there is greater price fluctuation. The volumes of available solar, wind and wave energy vary throughout the year. For this reason it is more important to store energy generated during peak production days, and use it when demand exceeds production.

Vøllestad and Strandbakke are currently working on an EU project involving research experiments at entirely different temperatures. They are using steam instead of liquid water to generate the hydrogen.

“The heat contributes to the reaction and at higher temperatures the catalytic activity is much greater“, say the researchers. This means that less electricity is needed to get the reaction to take place, making the hydrogen generated more competitive in the market. “Heat is much less expensive than electricity “, says Vøllestad.

“Working at higher temperatures offers an additional benefit”, says Vøllestad. “You don’t have to use noble metals.”

The fact is that the next generation of low-temperature electrolysers (the apparatus in which electrolysis takes place) requires platinum and other expensive noble metals in order to make water fission efficient. “At higher temperatures and greater catalytic activity, we no longer need these expensive materials to complete the reaction”, he says.

“It is probably no cheaper to manufacture a pipe of this type than to produce a battery. But you only need one pipe to generate the same amount of energy that would require several batteries. Compared with batteries, our process consumes much smaller volumes of raw materials in relation to the amount of energy that is stored”, says SINTEF researcher Einar Vøllestad.

The problem has been to find materials that can meet the rigorous demands encountered when steam reaches 600 degrees. This is where materials scientists Vøllestad and Strandbakke enter the stage. They began with a list of 120 materials that they believed might be suitable for different aspects of the process.

“The best materials for this reaction, i.e. those that we thought would be the best, are unable to stand up to steam at these temperatures”, says Vøllestad. “We used a material that we knew was effective, but observed that it did not withstand the pressure of the steam. So we finally decided to select this material and tweak the chemistry a little”, he says.

They now have the first electrolyser that works efficiently using pressurised steam and that can be scaled up for use in industrial processes. However, it is not sufficient simply to demonstrate this in a small laboratory. If research is to be applied in practice, it must be possible to run the process at larger scales.

“We have manufactured the pipes that will be used, making the system entirely scalable”, says Vøllestad. The final benefit is that using this type of technology and design means that the hydrogen generated is completely dry. All other electrolytic processes generate hydrogen contaminated with water or other molecules. These must be separated out before the hydrogen can be pressurised and stored. This is not a very complicated process, but the extra work means that the plant units have to be larger”, he says.

The material they use is composed of barium, lanthanum, gadolinium, cobalt and oxygen, and the researchers have named it BGLC.

“What we have done is to replace some of the barium in the original material with more lanthanum with the simple objective of making it more basic”, says Vøllestad.

Cheaper than batteries… in the long run

All this sounds expensive, but in reality the economics are sound.

“It is probably no cheaper to manufacture a pipe of this type than to produce a battery. But you only need one pipe to generate the same amount of energy that would require several batteries”, Vøllestad explains.

“Compared with batteries, our process consumes much smaller volumes of raw materials in relation to the amount of energy that is stored”, says Vøllestad.

He regards hydrogen as a good option, in particular in the transport and industrial sectors. In the transport sector, hydrogen is suitable for long distance transport by heavy carriers such as trains, ships and haulage trucks. In the industrial sector, Vøllestad highlights steel manufacturing where large amounts of heat are required in the production process. This is heat that can be used to heat the water for the electrolysis.

The next step is to put the production process on a commercial footing. The company CoorsTek Membrane Sciences, which is participating in the project as an industry partner, is well aware that this will not happen overnight.

“Development time lines for almost all energy-related technologies are long”, says Per Vestre, who is Managing Director at CoorsTek in Norway. Many years passed between the invention of the lithium-ion battery and its current application in millions of cars”, he says.

“Our development of ceramic membranes for electrochemical processes is a long-term project. There is no doubt that a market exists and that steam electrolysis is interesting if we can succeed in maturing the technology at the right price”, says Vestre.

Research into the next challenge

“There are still many steps that have to be optimised and developed further”, Vøllestad interjects. “The production method must be upgraded and we have to demonstrate stability over time. To date we have made measurements in a single pipe for more than 700 hours, but at industrial scale you have to construct a system consisting of a hundred, a thousand, or perhaps ten thousand pipes”, he says.

The work is well under way. The research that has resulted in the BGLC material has now been published in the June edition of the journal Nature Materials. Publication in such a prestigious journal takes time, and the work has advanced considerably since the paper was submitted.

“We are now eighteen months into a new EU project in which we are working to meet the next raft of challenges”, say Vøllestad and Strandbakke.

The research results were recently published in the journal Nature Materials.

News from our Members

Our contributions to BILANZ Magazine

Welcome to Successful Green, the international network for environment, innovation and information.

SG aims to encourage the exchange of ideas and knowledge among like minded people all over the world to improve a sustainable life worldwide.

Peter E. Merian used to be Director of the Basler Börse and CEO Bank Sarasin, Board Member of National Zeitung and Basler Nachrichten AG and founding member of the Global Environmental Society.

Lord Anthony St John of Bletso is a qualified solicitor and Member of Board, Rados International. Former Vice President of Business Development of OCRA, consultant to Merrill Lynch, director of WMRC plc and Pecaso Ltd. and Non-Executive Director of Regal Petroleum, Lord Anthony is currently an extra Lord-in-Waiting to HM The Queen. Since 1997 to the present he has sat on the Member of Lords EU Select Committee A. He is a spokesman on African affairs, deregulation, financial services and information technology. President of Friends of South Africaand used to be Iegal advisor for Shell in South Africa.

Dr. Betrand Piccard is wellknown for the first ever non-stop balloon flight around the world. Doctor of psychiatry and psychotherapy, President of Solar Impulse, which aims to fly around the world in a solar driven aircraft without producing any polluting emissions, Bertrand hopes to draw the public’s attention to the inevitable changes needed to ensure our planet’s future energy resources and ecology and to give environmental protection a positive and stimulating image.